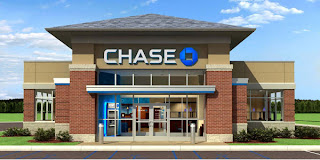 The former Sonny’s Real Pit Bar-B-Q on Cheshire Bridge Road near Lindbergh Drive was demolished this week to make way for Chase Bank. Sonny’s closed in 2009 shortly after its parent, Greater Atlanta Bar-B- LLC, filed for bankruptcy. Washington Mutual, now Chase, was already in the shopping center, in a small space on the Lindbergh side of the center. It will now have a larger free-standing branch. With the demolition wrapping up this week, construction could begin within the next week or so.
While this is a bank and not restaurant news per-se, I wanted to write about anyway for the reasons discussed below…
One, this is now the second restaurant (albeit this time closed) that Chase has knocked down for a branch. Last May, Chase bought out of the lease of the East Cobb location of The Flying Biscuit and demolished the building, constructing a free-standing branch in its place. These two restaurants are meaningful to me as saw each of them built. Having now just graduated from college, it’s amazing and kind of sad to think I’ve now managed to see buildings constructed, and also demolished.
The Flying Biscuit on Johnson Ferry was originally built as a Donato’s Pizza in the late 1990s, and was closed in 2002 when Donato’s left the Atlanta market. I think that it remained vacant for a short time until Raving Brands turned it into their now infamous failure, Mama Fu’s Asian House. The Asian concept was launched on Peachtree Road and grew to over a dozen locations before Raving Brands was hit with multiple lawsuits alleging, among other things, racketeering and fraud. Once said to exceed the growth rate of sister concept of Moe’s Southwest Grill (now owned by Atlanta-based Focus Brands), Mama Fu’s locations started dropping like flies. The chain was sold in 2008 and closed its first and last remaining Atlanta area location last year.
The Flying Biscuit was an Atlanta institution and loved by many but has become far too “cookie cutter” of late. The concept was purchased by Raving Brands in 2006 and started franchising in 2007. I believe the that conversion from Mama Fu’s to Flying Biscuit in East Cobb took place in late 2007.
Over at Lindbergh and Cheshire Bridge, a similar scenario played out. McDonald’s, in their constant chase of consumers’ changing behaviors and driving patterns, closed its location at 1824 Cheshire Bridge Road (now home to ROXX Tavern & Diner) and opened a new location within the newly constructed shopping center. In the early days, Ray Croc scouted new locations by hovering over neighborhoods in a the company plane looking for church steeples. He said these were “good American families” and that’s who he wanted as customers. Of course, today more advanced technology is used to monitor traffic counts and such, and it’s a change in traffic flow that led to the move.
The shopping center was constructed in the mid 90s if I recall. I remember accompanying my father on trips to Hastings Nature & Garden Center on that property. Today Hastings is located on Peachtree Road in Brookhaven.
Chase has stated they plan to significantly grow their Atlanta footprint and expect to have 74 branches open in metro Atlanta by the end of 2011. Chase inherited 55 branches when it purchased the banking operations of Washington Mutual in 2008. Another new location is progressing in a portion of the shuttered Linens ‘n Things at the Peach Shopping Center on Peachtree Road in Buckhead. Plans call for as many as 10 new locations each year for the next several years.
from “Tomorrow’s News Today“

One thought on “Biscuits and Bar-B-Q Out. Big Banks In?”