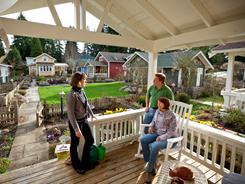 “We had a big, 2,500-square-foot home that we weren’t using,” says Brian, 58. “We had a very large yard. We felt tied to it every weekend trying to make it look halfway decent. … It was a great house, but too big.
“They looked for something smaller, but their only options were condominiums — until they saw an ad for an unusual new development just across city limits in Shoreline, Wash.: Eight cottages around a central garden. The first view from the access drive was the gable of a commons building and colorful rooftops jutting up behind it.
One look at the charming cluster of small homes (less than 1,000 square feet) and the Duceys put money down, sold their house and moved in five weeks later.
“It’s like the ultimate for us,” Brian says.
After decades of living large — mini-mansions in sprawling subdivisions the size of cities — some Americans are retrenching and showing a new appreciation for small, cozy and neighborly.
Architect Ross Chapin, who designed Greenwood Avenue Cottages, where the Duceys live, has coined a term for these new compact communities: pocket neighborhoods.
His new book — Pocket Neighborhoods, Creating Small-Scale Community in a Large-Scale World— documents a surprisingly broad array of such developments across the USA, from urban neighborhoods to suburban and rural areas.

Based in Langley, Wash., Chapin has developed 40 pocket neighborhoods across the country — many in partnership with Seattle developer Jim Soules of The Cottage Co. He is currently working on projects in Indiana, New Hampshire and Massachusetts.
Cities in the Puget Sound area have adopted cottage housing ordinances that often allow twice the number of homes on a lot as long as they’re small, limited in height and face a common area.
“Jurisdictions around the country are looking at these and adopting them,” Chapin says. “The idea of a pocket neighborhood is that you have nearby neighbors coming together around a shared space. … This really harkens back to the fact that we, as humans, are social. We want to be together.
“Together but private. And that’s what pocket neighborhoods may bring to a society that is increasingly aware of the need to save natural resources — no sprawl and less reliance on cars — yet still cherishes personal space.
Back to the basics
Changing demographics, including a large aging population fueled by the first of 77 million Baby Boomers turning 65 this year, also are reigniting a hunger for community.
“Having just gone through this era of the housing bubble and McMansions growing out of nowhere … now we realize that a lot of that was phony,” says Ben Brown, a consultant who specializes in “new urbanism,” a planning principle that encourages compact, energy-efficient living and communities that foster walking over driving.
Big houses get families to put all their needs under one roof, often isolating them from neighbors, he says. Now that gas prices are soaring, large homes that need lots of energy to heat and cool are losing their appeal.
Homes in pocket neighborhoods may be small but are designed to feel big and airy. Many feature high ceilings and skylights. Parking spaces and garages are usually out of sight to encourage residents to walk home through the shared gardens.
‘Perfect for my mother’
Developer Casey Land had always worked on large projects, such as shopping centers and multifamily units. Three years ago, partly inspired by Chapin’s cottage industry, Land decided to build the Inglenook Neighborhood in Carmel, a suburb of Indianapolis.
“A couple of times I had printed off little pictures of (Chapin’s) cottages,” he says. “Everybody always said, ‘That’s perfect for my mother.’ I had that comment more times than I can tell you.
“Six two- and three-bedroom cottages, ranging from 1,100 to 1,800 square feet plus a basement, are under construction in the first phase. Price: $200,000 to $400,000.
Land Development & Building Co. is putting Inglenook on 27 acres surrounded by existing development.
“Our target market is an empty-nester, a single parent with a child or two,” Land says. “It might be a single person, widowed or divorced, or somebody thinking of buying a condo but who doesn’t want to live with shared walls and wants to have a garden for therapy.
“Rosemary Sowler, 55, is single and childless and lives half a mile away. She and her longtime best friend, also single, talked for years about combining their households when they neared retirement. They were drawn to Inglenook’s location and environmental standards.
“Once I heard about the plan not only for the common areas but for the green aspects, I got excited,” says Sowler, a nurse who handles medical claims. “This is what we need to be doing in our homes. We need to build smarter and not larger.
“Todd and Jeannette Staheli and their two children live in a 1,000-square-foot cottage at Greenwood Avenue in Shoreline. After four years in their previous home, built in 1923, they still didn’t feel like part of a community.
They know their neighbors at Greenwood. Kids play in the common area. Weekly potluck dinners bring everyone together. Need someone to water the plants or feed the fish? Ask neighbors. Plus, their utility bills have dropped by half.
“We have less than the square footage of the typical American home,” Todd Staheli says, “and I’m sure we have less than half the hassle.”