Europeans are working hard to discourage drivers, cars and parking in their cities.  Why is American city planning different?
Ellen Dunham-Jones is a professor in the School of Architecture at the Georgia Institute of Technology.  She is a co-author, with June Williamson, of “Retrofitting Suburbia: Urban Design Solutions for Redesigning Suburbs.”

Which automobile-dependent landscapes in the U.S. are the most forsaken? Where would the pedestrian-oriented European strategies seem most out of place and yet potentially have the greatest impact on increasing affordability, health and livability while reducing greenhouse gases and re-using existing infrastructure? Commercial strip corridors. 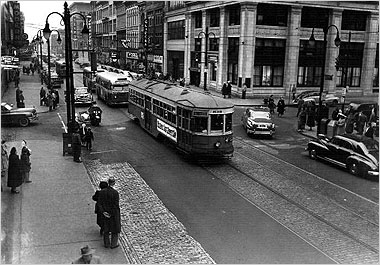 Top of the list of unloved, underperforming and ubiquitous places, they were engineered for the single purpose of swiftly moving cars. But overzoned for commercial uses, they are now clogged with cars on both local and through trips. They provide access to cheaper land and “drive till you qualify” affordable housing – but then eat up the savings as transportation costs have risen to 20 to 40 percent of household budgets. They are aging with little prospect of funding for maintenance. And their high vacancy rates just add to the dispiritedness of a failed public realm.

Can they be retrofitted into attractive, transit boulevards lined with trees, sidewalks and affordable housing and anchored by mixed-use centers with a public life to be proud of? June Williamson and I are tracking over 35 North American corridors that are being redesigned not to make driving miserable, but to recognize the multiple social, environmental, economic and transportation purposes that great streets serve. Their integration was highlighted in the grassroots-led temporary re-striping of Ross Avenue as “Ross Ramblas” in Dallas this week at Build a Better Boulevard. Participants employed several techniques of Tactical Urbanism, including pop-up shops, chairbombing and dumpster pools.

Every U.S. city once had street cars. Will Americans ever again support public investment in mass transit?

More typical is the ongoing 10-year revitalization of a five-mile stretch of Columbia Pike in Arlington County, Va. It exemplifies the intelligent use of tight form-based codes to grow from one-story strip buildings in parking lots to mid-rise mixed-use buildings fronting tree-lined sidewalks at nodes on major intersections. The site-specific code quickly tapers heights where the new development faces the existing neighborhoods and new bike lanes on the less busy streets. This strategy retains the existing affordable housing in between the nodes while the tax revenue from the new density goes toward supporting a streetcar.
Cambie Corridor in Vancouver is employing similar techniques but has upped the ante with some stunning modern mixed-use buildings and a highly efficient district energy system that balances out daytime commercial energy demands with the residential night-time peak loads.
Aiding these efforts is the new street design manual for walkable urban thoroughfares. It is the first officially recommended practice that does not refer to sidewalks as “vehicle recovery zones”! El Paso recently adopted the manual to connect its implementation of Bus Rapid Transit with redevelopment of outdated properties along five major corridors. Imagine if all 50 DOTs followed suit and revised their Level of Service Standards accordingly! We might see more transformations of urban highways to boulevards and Complete Streets.
Funding remains an obstacle and demand for Sustainable Communities Partnership federal planning grants far outstrips supply. Can private real estate developers fund streetcars as they did early in the 20th century? Can the public again support public sector investments in infrastructure, as it did mid-century? How else can we provide an alternative to our broken system of “drive till you qualify” affordable housing, accommodate changing demographics and markets and make our least sustainable landscapes into places worth caring more about?