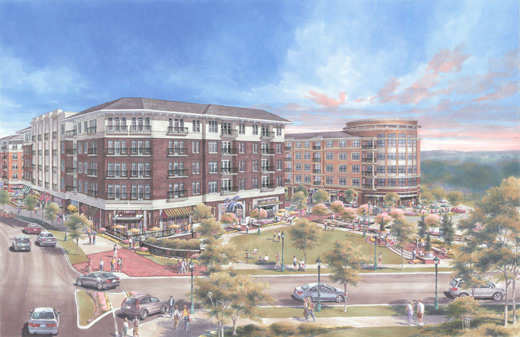 ATLANTA
(July 19, 2011) – Cousins Properties and Gables Residential have started construction on the $250 million Emory Point mixed-used development on Clifton Road. The development will be the first new retail project built in the trade area in 20 years; the largest private development start inside the Perimeter in more than three years; and the first partnership between Cousins and Gables – two Atlanta-based development companies.
“We’re very excited about Emory Point and are glad to see a development of this magnitude move forward,” said Larry Gellerstedt, Cousins President and CEO.  “This project represents an incredible infill opportunity in a supply constrained
submarket with high demand.  We’re fortunate to have an exceptional partner in Gables and are grateful for our strong relationship with Emory University, which trusted us with leading this opportunity.”
Located in the Clifton Corridor, adjacent to the Centers for Disease Control and Prevention and in close proximity to Emory University and Emory Healthcare, Emory Point is a vertically integrated mixed-use development; Phase I will include more than 80,000 square feet of retail space and 443 luxury apartments.
Under the DeKalb County zoning plan for Emory Point, 25 acres of densely wooded land behind the development, approximately half of the site, will be protected as undevelopable under Emory’s land classification plan.  Prior to the rezoning, those woodlands were not protected. The development site is also registered for EarthCraft Communities certification, while the apartment component is registered for EarthCraft Multifamily certification. In addition, retail portions of the development have been designed to meet EarthCraft standards.
“Emory Point sets the new standard for the Emory community because it blends pedestrian-friendly retail with luxury apartment living, all while being an environmentally conscious development,” said David Fitch, Gables Residential President and CEO. “There is tremendous pent-up housing demand in this neighborhood, making Emory Point a bright spot in an otherwise challenging market.”
The $100+ million Phase I of the project began construction early this month and is expected to be complete by fall 2012. The second and third phases of the project will be developed according to market demand in an area. Emory University, which includes Emory Healthcare, is the largest employer in DeKalb County and the third largest employer in metro Atlanta.
“The proximity of Emory Point to our campus will enhance the social and intellectual vibrancy at Emory by providing housing, dining and retail venues for faculty, staff and students,” said Mike Mandl, Executive Vice President for Finance and
Administration, Emory University. “This type of mixed-use development was envisioned during the creation of the Clifton Community Partnership five years ago, and it is gratifying to see it coming to fruition.”
http://www.emory-point.com/

MARTA officials said they’re working to decide whether they should build new railway or tunnel underground.

Area residents packed a community meeting hosted by the Lindbergh Lavista Corridor Coalition and state Rep. Pat Gardner regarding MARTA’s Clifton Corridor Transit Initiative Tuesday night.
The gathering was part of MARTA’s effort to solicit input surrounding the community’s preferred method of transit for the proposed corridor, which would connect the Centers for Disease Control, Emory University and DeKalb Medical to Atlanta’s regional mass transit system.
At the meeting, tensions arose between MARTA representatives and community members concerning whether the proposed transit-way should be built underground or aboveground.
MARTA Project Manager Jason Morgan said that the project’s transportation options have been narrowed to bus rapid transit, light rail or heavy rail, any of which would travel through the existing CSX right of way.

MARTA is unable to use CSX’s actual railways, Morgan said. If light rail is selected, MARTA could either expand the right of way by 70 feet to lay down additional tracks or elevate the light rail tracks above the right of way, he said. If heavy rail is selected, MARTA would chose between expanding the right of way and tunneling the new transit-way under Lenox Road.
Grady Smith, the consultant project manager for the initiative, said the tunnel alternative would least impact surrounding communities.
“The alternative to minimize impacts is the tunnel option,” he said. “The impact at the street level would be fairly minimal.”
Smith said that the tunneling would be accomplished through the process of boring, which he said is less disruptive than blasting. Blasting requires the use of explosives, while boring does not.
But not all community members in attendance bought Smith’s analysis.
“Tunneling would eliminate access to… businesses,” said Louis Myer, a Woodland Hills Neighborhood Association board member. “I want you to understand that we don’t necessarily want to follow the path that you want to take us down.”
Morgan insisted that MARTA had not settled on a course of action but reiterated that tunneling would have a minimal impact on surrounding communities.
“We haven’t chosen an option,” he said. “We’re trying to make it clear that there are trade-offs. Anything that operates at grade is going to have impacts.”
Jean Jordan, a Morningside resident, expressed concerns about these impacts following the meeting. Jordan’s property borders the CSX right of way, and she said she was wary of efforts to widen it.
“Our backyard is on this railroad,” she said. “Therefore it’s going to ruin our property if they build the light rail or heavy rail at grade.”
MARTA plans to hold another informational meeting later in the summer regarding Clifton Corridor station area planning. A subsequent meeting will be organized in mid- to late-August to announce the final proposed route and method of transportation for the transit-way.
The project will then be subject to approval by local elected officials before it can be submitted to a public referendum on levying a regional sales tax to fund select public transportation projects.
And even if all of these steps go as planned, it could be more than ten years before any sort of construction takes place.
For more information, click here to visit the Clifton Corridor Transit Initiative’s website.